Interesting article on the BBC. 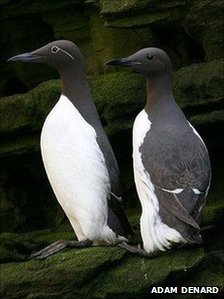 A stretch of coastline in the north of the Isle of Man has been designated as an Area of Special Scientific Interest to protect breeding birds.

More than 35 bird species use the steep rocky cliffs and grassy slopes that stretch from Port-e-Vullen to the Maughold lighthouse to breed.
A further 47 species of birds are also thought to use the 53-hectare area.
In addition to providing valuable nesting habitat, the cliffs also support patches of diverse grassland.
The designation follows a four-month consultation between the Isle of Man’s Department of Environment, Food and Agriculture, Manx National Heritage and local farmers.
DEFA Minister John Shimmin said: “I am happy to confirm this designation. It has the full support of the community and provides protection for a number of our coastal birds, giving recognition to the importance of this site”.
Kittiwakes, puffins, shags, cormorants, fulmar, guillemots and peregrine falcons all use the rocky cliffs.
The majority of the ASSI is owned by Manx National Heritage and director, Edmund Southworth, said the public were encouraged to make use of the coastal footpath.
Mr Southworth said:

“We are delighted that DEFA has recognised the importance of this very special area.
“We look forward to working even more closely with the department to open up access for visitors in a way which gives them a greater understanding of the habitat as well as protecting it for future generations.”