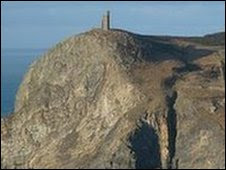 A headland on the Isle of Man will glow for the first time as its historic tower is lit up.

Milner’s Tower on Bradda Head will be illuminated by the Manx Electricity Authority on Thursday night. The energy firm, which will use solar power to light up the tower is keen for feedback from local residents.
If the response is positive, the authority’s chairman, Chairman Quintin Gill, MHK, says it could become a permanent fixture. Milner’s Tower was built in 1871 as a view tower in memory of William Milner, a maker of fire-resistant safes and a local philanthropist. His tower is built in the shape of a key and lock. bbc