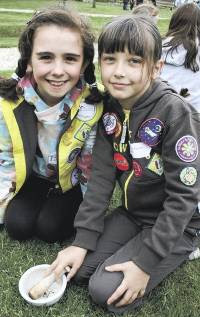 If you know me you know I’m a Girl Scout through and through. I’m now a Girl Scout Leader — and it all began when I was a Brownie and Girl Guide back in the Isle of Man.  I love this story — well done Manx National Heritage!  (Great movie choice, too) But ladies, ladies — we must teach you about S’mores! No camp trip is complete without them.
BRAVE Brownies spent a night camping at Rushen Abbey after hearing stories about its spooky past. A hundred Brownies from across the Island tried a range of activities reflecting the history of the site, arranged by Manx National Heritage.

The special trip was organised as part of Girlguiding Isle of Man’s celebrations for the guiding centenary. The girls, aged seven to 10, learnt about medieval herbs and potions and made their own medieval medicines. They waltzed on the lawn and played games such as croquet and quoits. There was also time to learn about Rushen Abbey’s ‘strawberries and cream’ history, and investigate recent archaeological discoveries there.

To leave their mark, the girls made their own special girlguiding centenary ceramic tile for a tile collage being put together at the abbey.

Later on in the evening, they jumped into their sleeping bags to watch the film Night at the Museum 2 and hear some ghostly tales about their surroundings.

Katy Graham, of Union Mills and the St George’s Brownie leader, said: ‘The girls loved the film, huddled in their sleeping bags with popcorn, as well as the tile painting. Chocolate spread was also a big hit at breakfast.’

Event organiser Julie Farrar said: ‘There is no doubt that events such as this is what makes girlguiding unique. It’s what we have done for 100 years and what we will continue to build upon.’

She thanked Manx National Heritage for its support in arranging the trip.

Katie King, community outreach and learning support officer for Manx National Heritage, said: ‘We were intrigued and delighted when the Brownies asked whether they could take over one of our sites as part of their centenary celebrations.

‘We thought it was an excellent idea to have Brownies sleeping over in spooky Rushen Abbey and we were very impressed by their bravery, even though we tried our best to scare them with our ghost walk.’

The guiding movement began in 1909 when a small group of young women gate-crashed the Boy Scout rally at Crystal Palace Park in London and lobbied Robert Baden-Powell for ‘something for the girls’.