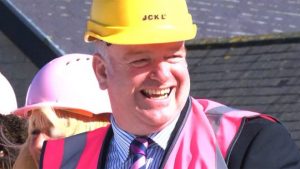 The political memberships of every government department have been announced. The only MHK not to get a position is Chris Robertshaw, member for Douglas East. He had been Minister for Policy and Reform in Allan Bell’s administration but stormed out of the Council of Ministers last year, frustrated at the slow pace of change in government.

Chief Minister Howard Quayle MHK announced the appointments, as agreed by the Council of Ministers, today. Proposals for the chairmanships and vice chairmanships of statutory boards, which are subject to approval by Tynwald, will be announced in due course. Mr Quayle said: ‘I am impressed and encouraged by the eagerness of Tynwald members, both old and new, to get on with the job and work together for the good of the island. ‘The departmental memberships combine fresh faces and fresh ideas with experience and continuity.’ MLC Tony Wild, convicted last year of drink driving, has also not been given a role.