If you’re a local songwriter and fancy a new challenge, then why not have a go at writing an original song in Manx Gaelic for the annual Arrane son Mannin Competition?

With a chance to win £300 in prize money (sponsored by Culture Vannin), this is a great opportunity for a group to fly the Manx flag at the Pan Celtic Song Contest in Carlow, Ireland, next year as representatives of the Isle of Man. 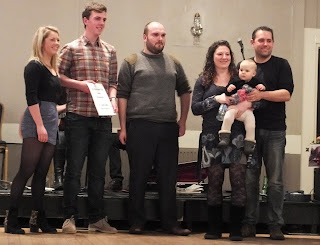 Local performers have been consistently in the top three (including first place) of the competition in recent years, which is held as part of the Pan Celtic Festival.
Don’t worry if you’re not familiar with the Manx language, as help is available to translate your song, which can be any genre, although it must be an original, unperformed composition.
Entry forms should be returned to competition organiser, Fiona McArdle, by 11 December, 2015, with song lyrics and music by 30 December, 2015.
The Arrane son Mannin Competition and Concert will be held at the Masonic Hall in Peel on the 9 January, 2016, starting at 7.30pm, to which everyone is welcome.
Further information and entry forms available from http://manxmusic.com/news story 400694.html, but if you have any questions please contact Fiona McArdle by emailing fmcardle@manx.net
Valerie Caine