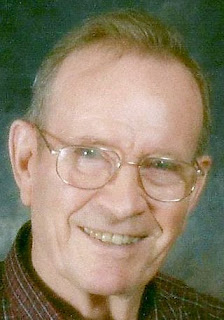 Calvin King Quayle is a Past President of NAMA and a former genealogist for the Association who was noted for being thorough and exacting. I hope that members who knew him better than I will contribute to this all too brief obituary which is the best I have been able to solicit so far.
Calvin was born July 22, 1927, in Logan, Utah to Joseph L. Quayle and Mabel Hillman Quayle. He died early Saturday, March 13, 2010 at the age of 82.
Calvin loved to read and learn and share what he had learned. He excelled at his studies and belonged to the National Honor Society. He received his Master’s Degree from Utah State University and his Ph.D. from the University of Minnesota. He taught at Preston, Idaho, high school, at Chico State College in California, at the University of Michigan at Ann Arbor, and at the University of Wisconsin-Eau Claire. He was head of the Speech and Theatre department at the university here. He had a great love for the theatre. He acted in plays in high school and college. He designed sets for, acted in and directed plays in college. He contributed to the arts in the community.
Calvin was cadet major in the ROTC and served in the Army in Coburg, Germany, from 1945 to 1947.
He belonged to the Church of Jesus Christ of Latter-day Saints and served as teacher, clerk, President of the young men’s program, president of the Sunday school, bishop, high council member, and regional welfare agent. He and his wife, Virginia, served a mission for the Church in Australia in 1986-1987. They also were called to serve in the Menomonie branch.
Calvin and his wife started one of the first storage businesses in Eau Claire – CQRT Storage on Mondovi Road. His son, Gordon, wrote a computer program to help with accounting. After selling the business, Calvin helped Gordon sell his software and offer support for those who bought it. On the side, Calvin split, stacked and sold firewood for many years.
Calvin was always generous with charitable work and contributions. He served on the Eau Claire arts council board, was secretary on the Senior Center board, worked at the free clinic, and helped with Mended Hearts after his heart attack in 2001. He visited heart patients and their families to inform them of what to expect and to ease their fears.
Calvin was preceded in death by his grandson, Aaron Price, and his parents. He is survived by his wife, Virginia (Winget); their children, Susanne (Daniel) Price, Pamela (Keith) Warren, Gordon Quayle (Shelly); 13 grandchildren and 12 great-grandchildren and another on the way.