Kelly McCarthy Posted on January 10, 2013 Posted in Uncategorized
“St Stephen’s Day (Boxing Day) dawned fair and fine and several groups went about the streets to ‘Hunt the Wren’ in various parts of the Island, notably Douglas, St John’s, Ramsey and villages along the north west coastline. Whilst other traditions have fallen by the wayside Hunt the Wren has remained a popular event, bringing colour and vibrancy to a number of towns and villages and raising funds for local charities. 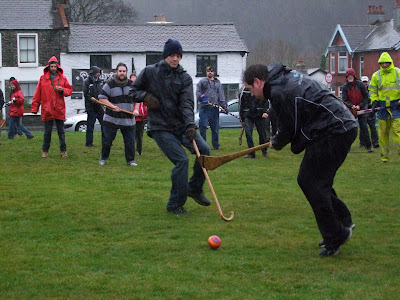 Meanwhile the annual Cammag Match held on the front green at Tynwald Hill in St John’s later that afternoon went ahead despite atrocious weather conditions, as teams representing the north and the south battled torrential rain and wind to take the coveted trophy. A good turn-out of players and bystanders saw the north triumph in a game with a final score of 9 – 4 before a well deserved pint in the nearby Tynwald Hill Inn with an opportunity to catch up with friends and a music session.”
Valerie Caine
Copyright January 2013