Carried throughout the world – and the Isle of Man 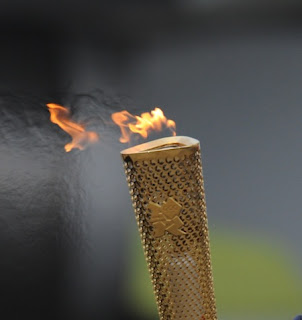 The Olympic torch will get to the Isle of Man tomorrow and motorcycle (it isT.T. week!), tram and boat will be used to transport the official Olympic flame around the island when it makes its much heralded visit. Track the torch on its way to London here: http://www.london2012.com/torch-relay/route/
And here’s the IOM tour: http://www.london2012.com/torch-relay/route/visits=isle-man/
The official start of the Manx leg of its tour around the British Isles is at the National Sports Centre, Douglas, on Saturday where it will complete one lap of the running track before heading off for the Quarter Bridge to Braddan section.
This will celebrate the island’s motorsport heritage by travelling along the TT course with torch bearer Enduro star David Knight who will be a passenger on a motorcycle ridden by TT winner Richard “Milky” Quayle. The torch will arrive in Braddan at about 10.25am.
RNLI founder Sir William Hillary was an Isle of Man resident and to commemorate this, a crew member from each of the island’s lifeboats will be on board the Douglas Lifeboat, the Sir William Hillary, while the torchbearer carries the torch from Battery Pier to Circus Beach. This is expected to be at about 11.20am.
The island’s vintage transport systems will play a role with the torch being carried by both horse tram and electric tram and the success of cyclists such as Mark Cavendish and Peter Kennaugh will be reflected in a bicycle section along Douglas promenades.
Arriving in Laxey for 2.20pm, the torch will briefly visit the Laxey Wheel before heading back down to Onchan for 2.40pm, Ballasalla for 3,15pm and finally Castletown for 3.40pm.