Local fiddle player, Tomas Callister, has been nominated along with four other musicians, for Instrumentalist of the Year in the annual MG ALBA Scots Trad Music Awards 2015, and here’s your chance to help him clinch the award.
Organised by Hands Up For Trad, awards will be handed out within sixteen different categories ranging from Album of the Year to Gaelic Singer of the Year, to be announced at a gala evening at the Caird Hall in Dundee on the 5 December.
The Peatbog Faeries, Shooglenifty, Skerryvore and the Shotts and Dykehead Pipe Band will be amongst the nominees for this year’s awards, the results of which will be decided by public vote. 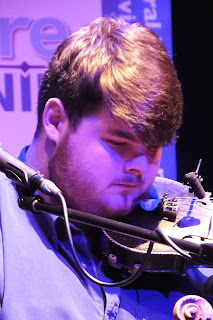 Currently based in Glasgow, where he is rapidly making a name for himself in Scottish music circles, Tomas is best known for his work with Island bands Barrule and Mec Lir, as they take Manx music to a wider audience.
Tomas has been playing the fiddle since about the age of five and soon became immersed in the traditional music of both Ireland and the Isle of Man.
Moving to Uist in 2010 to study at UHI Benbecula then exposed him to the diversity of Scottish music, particularly that of the west coast, and he never looked back.
Tomas has recently represented the Isle of Man with both Barrule and Mec Lir in Nova Scotia, Scotland, Brittany and Australia.
Votes can be cast until the 20 November at: