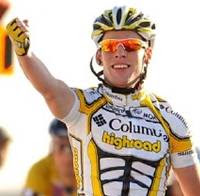 Mark Cavendish won the second stage of the Three Days of De Panne in Belgium this afternoon, his seventh win of the season. The Columbia-Highroad star won the 219-kilometre stage from Zottegem to Oostduinkerke, beating Australian Robbie McEwen (Katusha) and Italian Francesco Chicchi of Liquigas in the sprint. The Three Days of de Panne finishes tomorrow with a road race stage in the morning and an individual time-trial in the afternoon. Cavendish is out of contention in the general classification as he finished in the peloton yesterday well behind the stage winner.

Cavendish now has a total of 35 wins in just over two years in the pro ranks. Chris Boardman tops the Cycling Weekly list of all-time British pro winners with 41 victories.

This picture was taken in Qatar, where, by coincidence, your Blogger is working for the next few days.