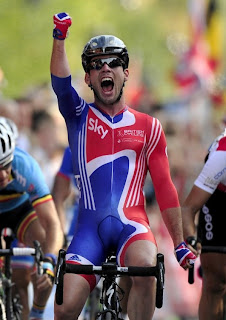 THE Isle of Man’s Mark Cavendish has won the Men’s World Championship Road Race in Copenhagen, Denmark to be crowned world champion on Sunday afternoon.
The Manxman, tipped by many to be among the main contenders for the title in the flat course in the Danish capital, produced one of his trademark sprint finishes to oust his HTC-Highroad team-mate Matt Goss to the line.
The 26-year-old’s British team, which included the likes of Geraint Thomas, Chris Froome and Bradley Wiggins, worked tirelessly throughout the 266-kilometre race, with Wiggins in particular instrumental in chasing down the leaders at the front of the peloton.
A massive crash inside the final 100km of the race put paid to the hopes of several of the Manx Missile’s main rivals, including defending world champion Thor Hushovd.
The breakaway riders remained out in front until just a few kilometres from the end and from there on in it was all about the work of the British team as they expertly delivered Cav to the finish where he stormed to victory.
In doing so, the Manxman become only the second ever British winner of the World Championship Road Race, the only other being Tom Simpson way back in 1965.  BBC
A full report along with photographs will be in this week’s Isle of Man