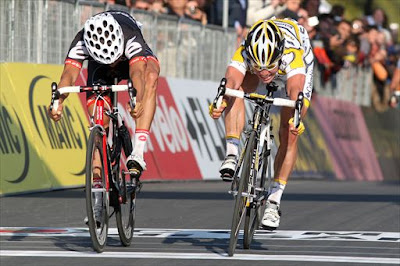 Milan-Sanremo or Milan-San Remo, la classica di Primavera (“the Spring classic”), is an annual cycle race between Milan and Sanremo. It is the longest professional one-day race at 298km. The first was in 1907, when Lucien Petit-Breton won. Today it is one of the ‘Monuments‘ of European cycling, and part of the UCI ProTour until 2007.

Milan-Sanremo is often called the sprinters‘ classic while its sister Italian race the Giro di Lombardia held in autumn is the climbers‘ classic.

Mark Cavendish became only the second British rider ever to win the Milan-San Remo classic when he sprinted to victory this afternoon. Official result of the 298-km Milan-San Remo Classic race in Italy on Saturday. 1. Mark Cavendish (Britain / Columbia ) 6hrs 42mins 31secs”