Kelly McCarthy Posted on May 18, 2009 Posted in Uncategorized 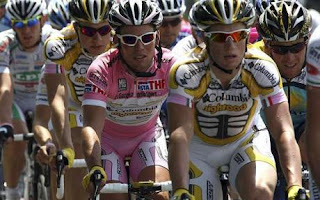 Yesterday’s Giro d’Italia was a bit weird. The peleton (as the collected riders are known) decided to ride a go-slow in protest of the dire road safety afforded to them by the Italian authorities. The race only picked up in the third from last lap and Cav won. More in the Daily Telegraph.

There is some debate going on about the amount of money being spent on a flash yacht that Isle of Man film has hired for the Cannes movie festival. Here At the festival, which ended on Sunday, Me and Orson Welles, a production starring Zac Efron filmed in the Isle of Man last year, was screened. Three filmswere also promoted to distributors – Heartless, directed by Philip Radley, and Wild Target, a hitman caper starring Bill Nighy and Helena Bonham Carter – which were both filmed last year. They have also taken thriller Disappearance of Alice Creed, which is currently in post-production after being filmed at the start of this year.