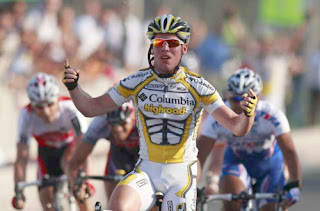 If Mark Cavendish wins Sunday’s final stage of the Tour de France, don’t be surprised if he bursts into tears. Tough, brash and outspoken, the 25-year-old British sprinter, who as of mid-July has notched an incredible 57 victories in his four-year pro career (most pro cyclists are thrilled to win one or two races a year), is known to shed a few tears.

“Things mean a lot to me,” said Cavendish, who rides for the U.S.-based HTC-Columbia team, known for its anti-drugs stance. “I’m passionate about everything I do — racing, relationships or anything else in my life,” he said via phone while getting a massage after a brutal mountain stage through the Alps on July 12. “With that passion comes tears. They’re the most open of emotions, and you really can’t fake them.”

All from the Chicago Tribune.

If Cavendish wins Sunday’s stage, which he won last year, it’ll be a major victory for him and his team. In 2008, he had 20 victories, including four stages of the Tour. Last year, he had 23 wins, including six at the Tour.

This year was tumultuous for Cavendish, and he came into the July race with just three wins under his belt. Complications from pre-season dental surgery left him unable to train for three weeks. He broke up with his fiancee, and a close friend was seriously hurt in an accident. He publicly criticized a teammate, and the press hounded him about not winning.
The move that turned off fans, however, came at the end of April, when Cavendish made an obscene gesture aimed at his critics as he crossed the finish line first at the Tour de Romandie.
Cycling fans questioned if the boy wonder would crack in the Tour de France. But July 8, he won the 116.5-mile stage 5, dissolving into tears on the podium. He won the next day, and again July 15.

“He hasn’t had an ideal year in the lead-up to the Tour, and he obviously had a huge amount of pressure on him from the media, the team and probably himself,” blogged teammate Michael Rogers. “All that pressure came out after the win.”