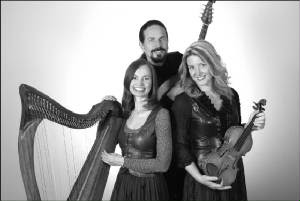 The Antelope Valley Community Concert Association will host its community concert at the Lancaster Performing Arts Center featuring a performance by Golden Bough. Golden Bough will take the attendees on a musical tour through seven Celtic lands. Join the tour and visit the musical stylings of Ireland, Scotland, Wales, Cornwall, the Isle of Man, French Brittany and the North of Spain (Galicia).The Golden Bough features an assortment of musical instruments including the guitar, harp, violin, ace-fiddle, accordion, penny whistle, and the mandolin. The concert will take place at the LPAC on Tuesday October 27th at 8:00pm.

The Antelope Valley Community Concert Association has been a staple of music lovers in the Antelope Valley for the past 61 years. Each fall and spring a new concert series is brought to the Valley offering an array of musical talents. The Golden Bough is just one of the amazing concert tickets in town, and not the last of this season’s series. Check back often to learn about other shows!For more Information contact the Antelope Valley Community Concert Association at http://avcommunityconcerts.com/. Or the LPAC at 750 W. Lancaster Blvd. • Lancaster, CA 93534 Tel: 661-723-5950 •