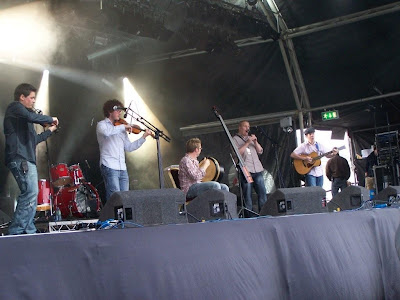 Popular local band ‘King Chiaullee’ will be flying the Manx flag for the first time at the prestigious annual ‘Celtic Connections’ festival held in the city of Glasgow later this month, where they will be joined by professional guest musicians and friends Malcolm Stitt, Rachel Hair and Jamie Smith and Manx Gaelic singer Greg Joughin from ‘The Mollag Band’.
It’s a lengthy festival (eighteen days), but this doesn’t put off music lovers attending an incredible 269 events spanning 14 venues across the city of Glasgow. Recognised throughout the world for its quality entertainment covering many genres, the festival will be launched with a torchlight procession through the city centre before the opening concert featuring a 50 strong orchestra.
‘King Chiaullee’ will be playing at the ‘Old Fruit Market’ along with two other bands from Europe’s Celtic territories. ‘Pennoù Skoulm’, said to represent some of the best musicians in Breton music was originally formed in 1982, but disbanded in the early 1990s before reuniting in 2009 to make their second recording. The Galician band ‘Marful’ draw their inspiration from a combination of café jazz, dance hall music from the 1930s -1950s and their own Celtic tradition, creating a Latin tinged sound to their music.
Since being awarded first prize for the best new band of the year at the annual ‘Lorient Inter-Celtic Festival’ in 2008 ‘King Chiaullee’ has continued to make its mark in world music circles, as Manx music becomes better known outside of the Island.
Spokesman for the band David Kilgallon said, “King Chiaullee will be the first Manx band to feature at ‘Celtic Connections’ and it is hoped that our presence at the festival will not only raise the profile of the Island and its culture, but open the door for other Manx acts in the future”.
The invitation to play in Glasgow also provides the band with a unique opportunity to mix with influential agents, festival organisers and media associated with Celtic and world music, bringing valuable publicity to the Isle of Man.
Attracting its audience from around the world ‘Celtic Connections’ is not just simply a folk festival, but more a festival of music bringing together musicians from as far apart as Japan, the Nordic countries and the Balkans. ‘King Chiaullee’ will be rubbing shoulders with the likes of top Galician piper Carlos Nunez, Irish professional band Dervish and Scottish based flautist Nuala Kennedy who performed on the Isle of Man during ‘Yn Chruinnaght’ 2009.
The choice of events is mind boggling and includes late night sessions, concerts, a festival club and a vast array of workshops ranging from Gaelic song, ukulele and samba drumming to gospel music, the Norwegian fiddle and the harmonica blues. But perhaps the most interesting of them all is the opportunity to learn how to blend your own Scotch whisky!
There will be an opportunity to see ‘King Chiaullee’ and their guests perform their Glasgow set at the Centenary Centre, Peel, at a fund raising event later this month (see website for details).
Their visit to ‘Celtic Connections’ has been generously supported by the Isle of Man Arts Council and the Manx Heritage Foundation.
www.kciom.com
www.centenarycentre.com
(Courtesy of Manx Tails)
Valerie Caine
© December 2009