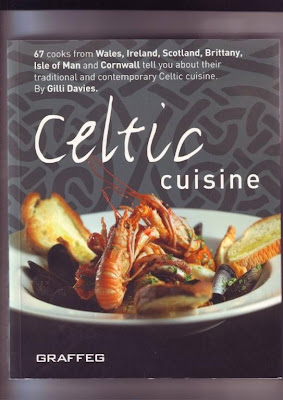 The thought of yet another Celtic cookery book has some people cringing at the thought of cooking over an open fire, and the wholesome concept of ‘back to basics,’ when all they fancy is something tasty from their local take-away. However, a recent publication, simply entitled ‘Celtic Cuisine,’ has very cleverly combined the old and the new within a lavish book, which is likely to appeal to both those who are interested in the subject, and others who are just looking for something different.

Refreshingly appealing to the eye and well presented, ‘Celtic Cuisine’ is beautifully illustrated with mouth watering photography, and one hundred and sixty recipes to choose from, collected from the six Celtic nations including the Isle of Man.

Conveniently split into various sections for easy location, including vegetarian, fish, game, poultry, drinks and preserves, the book highlights both traditional recipes and inventive variations for modern day cooks. Incorporating a short introduction and history of Celtic cooking, this book reminds us of the ingenuity of our ancestors as they used what was naturally around them to their best advantage. Hints and tips are liberally scattered throughout the book, together with potted histories of the recipes themselves.

The author, Gilli Davies, is well placed to write about the topic of food, with a passion for the subject spanning thirty years. At the age of nineteen she was running a bistro in Oxford, but later wrote and presented a ten part TV series entitled ‘Tastes of Wales.’ Her interests in the world of cookery are diverse, having previously written ten cookery books based on local food culture in Cyprus and Wales, lately cultivating an interest in organic produce.

Recipes range in complexity. Following the long lost art of seasonality, ‘Celtic Cuisine’ shows distinctly, and not without some pride, how to use produce which is all around us, some of which is available free on the hedgerows and trees of the Manx countryside. The ancient Celts were nothing if not versatile when it came to producing a good, wholesome meal, using available crops and other foods efficiently; wasting nothing.

This book paints a picture of how our ancestors once lived and their awareness of their surroundings, revealing a determined forager who survived well on what we might perceive a frugal diet, exploiting both sea and land.

From a local perspective there are one or two Manx recipes not included within this publication which deserve their own page if the book is revised in the future. Despite this ‘Celtic Cuisine’ is an excellent book, bringing Celtic cookery into the twenty first century kitchen, where it surely deserves its own place on the kitchen shelf.