Chelsea Gowland – Proud to be representing Isle of Man in Malta! 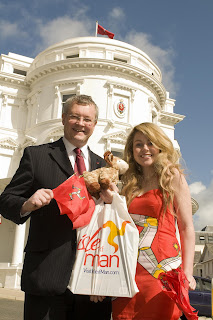 CHELSEA GOWLAND is heading to Malta on Wednesday to represent the Isle of Man in an International Hit Song Festival.

Sixteen year old Chelsea will be singing the song which has been recorded especially for the TTXGP, the world’s first clean emissions motorcycle race, and will be competing alongside nine other countries. She is featured on a new version of John Mayer’s ‘Waiting on the World to Change’ along with other singers and musicians from the Island, which has been recorded especially for the Race. The song was produced by Dave Armstrong of Dam Productions and Running Media.

Hon Martyn Quayle MHK, Minister for Tourism and Leisure, met Chelsea earlier this week to wave her on her way with a selection of Manx goodies to distribute in Malta, including a Manx Loaghtan lamb mascot. He said:

‘We are all excited and supportive of Chelsea representing the Isle of Man and wish her the very best of luck in the International Hit Song Festival in Malta this Friday. She has certainly done very well indeed to qualify and it is fantastic that she will actually be wearing the Manx flag and singing the song which has been recorded especially for the TTXGP. She is a great ambassador for our Island and I’m sure this is just the start of a long career in singing.’ The TTXGP will be held during this year’s TT Races on the Isle of Man and will take place at 10.45am on June 12th before the Senior TT blue riband event.