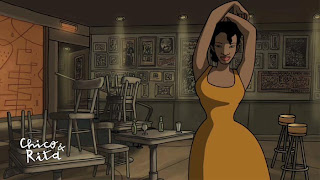 The Isle of Man was involved with the financing of this movie which traces the development of jazz from when Cuban music hit the American scene. I can’t wait. It’s already won awards — no wonder — the animation is amazing but the music, the music, is sensational.    www.chicoandrita.co.uk

All the directors were excited by the chance to capture a definitive moment in the evolution of jazz music. Says Tono Errando, Director, “It was the moment when new musicians came along like Charlie Parker and Dizzy Gillespie with a new kind of music, that is not for dancing, full of notes, played really fast, a music that now we call jazz. Then the Cuban musicians arrived. Dizzy Gillespie has said many times in interviews, there was a moment for him that was very important, it was the moment he first played with Chano Pozo. Chano Pozo was the first percussionist that played in a jazz band. It’s a new instrument. He brings all these Latin and African rhythms that are very new for these musicians, and this new instrument also changes the way you have rhythms. The drummer has to play in a different way.”

Fernando Trueba is a multi-award-winning writer, director and producer, with a career spanning more than three decades in film, television, documentaries, theatre and music. Belle Epoque, starring ingénue Penelope Cruz, won both the Oscar and BAFTA for Foreign Language Film. Trueba enjoyed a brief flirtation with Hollywood with romantic comedy Two Much, starring Antonio Banderas, Melanie Griffith and Daryl Hannah, but he returned to his native Spain with films such as La Niña De Tus Ojos (The Girl Of Your Dreams), also starring Cruz, which premiered at the Berlin Film Festival and netted seven Goya awards.

One key creative decision for the film-makers was the animation style: how real; how graphic. Explains Errando: “We had to investigate what quality of movement we needed for the film. Live action is very precise. Animation needs to invent another reality. You move a character using other ways, it’s another quality of movement. You have all these feelings that an actor is giving you, on the other hand we want the poetry that animation can provide. We spent about six months discovering the right balance.”

Assembling a team of animators capable of animating Mariscal’s designs was also a challenge. Says Errando: “In a film you need great casting, and in animation the actors are the animators. We chose some of the best animators we could find, all of them had a lot of experience. But then we had to ask them, ‘Hey guys, forget everything that you have done in your life. Here you’re not going to use all the tools that you’re used to. Forget about stretch, squash, anticipation, and start animating in a very different way, in a very new way.’ Some of them reacted very well, and they found it fascinating, and some of them couldn’t do it, it was very frustrating. For us it was hard to tell a great professional, ‘I’m sorry, this is not what we need.’”