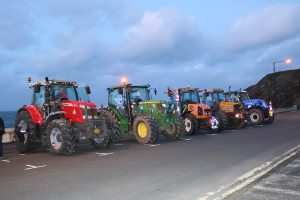 Despite being only the second year running this event, the Isle of Man Young Farmers’ Christmas Tractor Run captured the imagination of the Manx public, as fifty working tractors left the Island’s farms to raise funds for local charities.

Gaily decorated for the festive season, they gathered along Marine Parade in Peel and at Tynwald Mills in St John’s before embarking upon a dedicated route along the TT course, with large numbers of spectators gathering at various points along the route.

The convoy headed diligently towards the northern town of Ramsey, where those involved with the event were treated to supper from two local chip shops (The Trawlerman and Bourne Plaice Chippy) before continuing their journey through the village of Laxey and onwards to their destination at the TT grandstand in Douglas.

They were accompanied by a number of volunteers and helpers and assisted on their journey by members of the Isle of Man Constabulary Roads Policing Unit.

Money raised by the event was donated on the night, via their Just Giving page and by sponsorship of one of the attractively decorated tractors – with almost £10,000 raised for local charities Isle Listen and Manx Breast Cancer support Group. 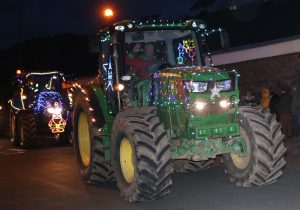 Next year’s date for the Isle of Man Young Farmers’ Christmas Tractor Run is 12th December, 2020.