↓ Skip to Main Content
Home › History › Clarion call to all loyal Manx wherever you are. Save Ramsey Pier!

Clarion call to all loyal Manx wherever you are. Save Ramsey Pier! 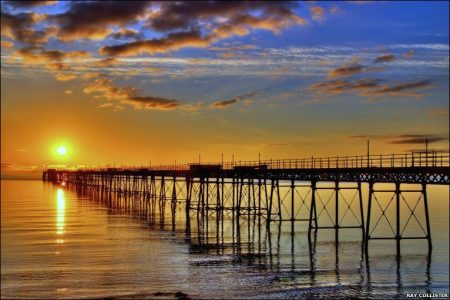 We are writing to you as we hope that though you may live far away, you may keep strong links with your Manx roots, and will be happy to hear that one of the iconic landmarks of the Island has a real chance at last of being restored.

This iconic structure was built in 1886, designed by the foremost naval architect of the Victorian era – Sir John Coode, as one of his last works.  It is the 6th longest pier in Great Britain at 684metres long.  Sir John also built and advised on harbours in Australia, New Zealand South Africa and all over the UK.

For 100 years the pier functioned as a dock for smaller shipping, a landing point, and an unparalleled recreational asset where people came from all over the island and beyond to ride on the little train, fish from its bays, and enjoy the superb view of the northern plain which borders the sea front of Ramsey and Maughold Head.

Over the last 20-30 years Ramsey has been a bit in the doldrums.  Parliament St seemed to be full of empty shops, the Mooragh Park looked rather dejected, cold and windswept – and the Pier sat forlornly empty and abandoned.  Various attempts were made to work out what to do, both by individuals (The Friends of the Queen’s Pier) and by the Government, who carried out an island-wide questionnaire on what should become of the iconic landmark. An overwhelming majority supported the view that the Pier be retained but until last year, nothing happened.

However, I am delighted to let you know that  – at last! – a group of retired engineers, naval officers and general Pier enthusiasts have by pure will power managed to convince the Government that something can be done.  In the last year they have set up a Charitable Trust (The Queen’s Pier Restoration Trust) with all its relevant officers, bank accounts etc, They were then authorized to undertake a full structural survey of the pier.  By October every bay, strut and plank had been examined, filmed and structurally assessed. Amazingly the cast iron legs are still in good condition, and though many of the girders will need to be replaced, it is a relatively easy task.  Even much of the 150 year old teak planking is still in excellent condition!  The railings, and some of the smaller artifacts are still safely in storage in Jurby.

The completed survey has recently been handed to the Government, who have already moved to begin reconnecting water, power and drainage to the Gate House, and they have promised a decision on our request for a 5 year lease to undertake the full restoration of the pier using largely volunteer labour and a major fundraising effort to obtain the needed replacement materials  – by March this year.

We cannot start full scale fundraising until this undertaking is signed and sealed – but we need funds to begin the restoration as soon as we get the permissions.

We write to ask if you could help us through your members generosity, but only to be paid once the lease with the Government is signed?  We are confident that with this, and with other money that is being collected on island, we should have enough straight away to begin restoring the gatehouse, building the gantry to remove defective girders, and for purchasing the necessary raw materials so that we can begin the work on the Pier itself as soon as the weather is suitable.

A large board will be erected at the entrance to the Pier which will commemorate any donations of £1000 and over.  Individual planks and girders can also be “purchased”, and small plaques with donors’ names which will be made by the Manx Disabled Workshops, will be fixed to a beam running along the edge of the pier walkway.

Tourism is going to be more and more important to the Isle of Man, and this restoration of an iconic landmark will greatly boost the progress of Ramsey and the Northern Plain into becoming a Gourmet Destination of choice – great restaurants, cafes and gift shops have sprung up recently.  Plans for the Pier include a Victorian style coffee shop on the first bay – a battery run train running the length, a multipurpose hall at the far end for concerts, parties, docking facilities for smaller yachts and boats, and of course – lots of space for angling, including a facility for selling the catch – much needed now we longer have a fishmonger in Ramsey.

Please be part of this great public effort and register your willingness to help us – in however small a way.   Of course if you – or your children, could come over and spend a few months working with our volunteers in the workshops, in the replacing of defective elements or in cleaning down and repainting the good parts, you would be hugely welcome!