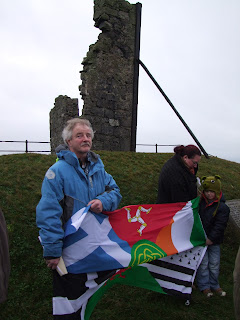 An estimated one hundred people gathered at Hango Hill, near Castletown, on the 2nd January to commemorate the death of Illiam Dhone (dark-haired William) executed by firing squad  close to this spot in 1663 for treason, but subsequently pardoned by King Charles II of England.

Otherwise known as William Christian, he came from a powerful Manx family but became embroiled in the complexities of the English Civil War, which saved the Island from horrific bloodshed but ultimately cost him his life.
People’s views on whether he was a patriot or a traitor differ, but the recent publication of a biography about Illiam Dhone by Jennifer Kewley Draskau on this topic will perhaps assist readers to come to their own conclusions. 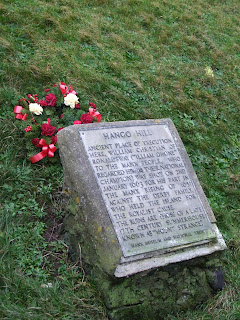 Independent speeches were given in Manx Gaelic by Christopher Lewin and in English by Mark Kermode of the Manx Republican Nationalist Party Mec Vannin before the laying of a wreath in memory of Illiam Dhone at the windswept corner which was also known as Mount Strange.
The event, organised jointly by the Manx branch of the Celtic League and Mec Vannin, ended with the singing of the Manx National Anthem before the crowd dispersed either to the Ship Inn in Castletown, or Malew Parish Church for a service of commemoration for the life of Illiam Dhone.
www.mecvanin.im
Valerie Caine
© January 2013