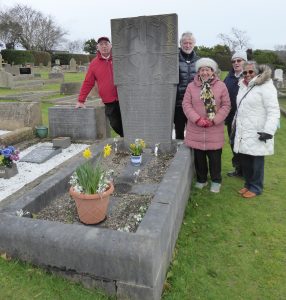 Members and supporters of the Archibald Knox Forum gathered at the grave of the famous Manx born designer, situated in Braddan New Cemetery, to commemorate the anniversary of his death.

Director of the Archibald Knox Forum, Chris Hobdell, recited a short prayer at the grave-side before placing a floral tribute at the distinctive stone – initially designed by the artist for another family.

Archibald Knox was born on the Isle of Man at Cronkbourne village in 1864, joining the Douglas School of Art (where he became a pupil teacher and studied with another celebrated Manx artist John Miller Nicholson) and teaching at Douglas Grammar School.

Later he moved to a teaching position in Surry, before being appointed head of design at Kingston upon Thames Art School. It was during this period that the world-renowned designer began employment with the Silver Studio who supplied the world renowned Liberty & Company in London; establishing Knox as one of the major designers in the Art Nouveau style. Preferring to describe himself as a Celtic Revivalist, this was a prolific time of his career.

Knox moved, briefly, to the USA before returning to settle permanently on the Isle of Man – where he was employed as a parcel censor at Knockaloe Internment Camp during World War I and returned to teaching. 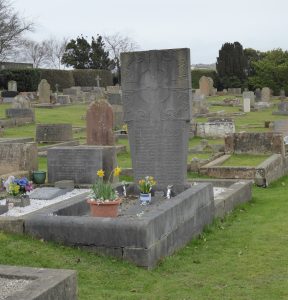 Despite his success, Knox shunned publicity and was remembered as a somewhat private individual.

Further information about the designer can be found at www.archibaldknoxforum.com or on their Facebook page.