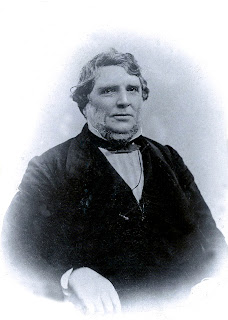 On the 19th March, 2012, a simple wreath laying ceremony organised by Island based author Robert Stimpson, will be held at the Corrany Bridge to commemorate the 150th anniversary of the death of William Kennish, one of countless numbers of Manx men and women who have emigrated from these shores, many of them largely forgotten. But Robert Stimpson was determined that this would not be the fate of William Kennish, a remarkable individual who enjoyed a brief renaissance some years ago before lapsing back into the shadows.
Robert Stimpson’s extensive research has brought this man’s story back into the public’s consciousness, and for the first time the work of this Manx inventor, American pioneer, explorer, poet and forgotten genius has been brought together in celebration of Kennish’s remarkable achievements.
The Hon. Clare Christian MLC (President of Tynwald) will lay a wreath by the plaque placed on the Corrany Bridge by Maughold Heritage Committee in 1988 and unveiled by Mrs Christian’s father Sir Charles Kerruish.
Accompanied by the Hon. Stephen Rodan (Speaker of the House of Keys) and Captain of the Parish Mrs Hazel Lace, they will also be joined by Lt Commander Anthony Wyld representing the Royal Navy and senior representatives from  Manx National Heritage, the Manx Heritage Foundation, the Isle of Man Prison Service and a number of other Manx organisations. Two pupils accompanied by a teacher from Dhoon Primary School and a number of Manx family descendants will also attend this poignant event. 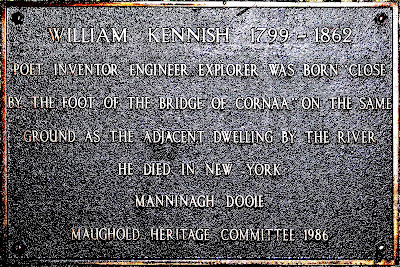 At the close of the ceremony invited guests will gather at the nearby Dhoon Church for light refreshments provided by the Isle of Man Victorian Society, when there will be an opportunity to study a selection of plans and papers from Robert Stimpson’s collection of Kennish memorabilia.