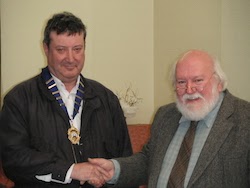 Leslie Hanson became the new President of the Wold Manx Association at the AGM held on Saturday March 7th 2015, succeeding Peter Kelly who completed his five year term of office.
The World Manx Association is the umbrella organisation for all the numerous Manx Societies around the world.  Handing over the chain of office, Peter commented that Leslie would make an excellent President having many connections with the Manx Societies in America and he has at his own expense travelled to The States for the biannual North American Manx Association congress for several years.
Leslie’s mother, the late Betty Hanson, was President of the W.M.A. in the 1980s and whilst Leslie has tended to hide his light under a bushel, Peter said he has many hidden talents and is a very capable person.

Leslie is well known to members of the North American Manx Association as he regularly travels to our Conventions and made a point to join us when we visited the Isle of Man last year. Congratulations, Leslie, we hope to see you again soon!