Cosmonauts to visit Isle of Man in space tourism promotion 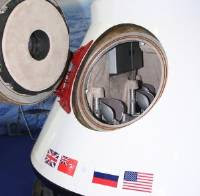 AN Isle of Man-based company aiming to take tourists into space in 2013 is to show off one of its spacecraft at King William’s College later this month.

Excalibur Almaz Limited, which has its headquarters at 15-19 Athol Street, Douglas, has acquired several Reusable Return Vehicles, or RRVs, that were part of a top secret Soviet programme in the 1970s.

The RRVs were designed for flying cosmonauts to the former Soviet Union’s secret Almaz space stations and the Manx company has bought two of the stations as well.

The Manx emblem appears on a British ensign on the side of the Excalibur Almaz space capsule. The so-called ‘defaced ensign’, that is one with a symbol added to that of the Union Flag, is used as the flag of origin flown by vessels on the Isle of Man ship registry.