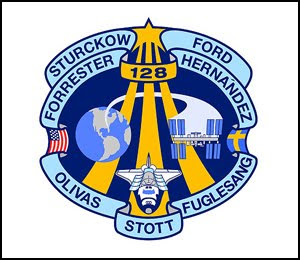 The weather in Florida during this time of year is normally uncooperative when it comes to launching spacecraft. It had a three hour thunder and lightning storm last night just off from the Kennedy Space Center. It was very impressive with lots of cloud lightning where the bolts crisscrossed the sky like the veins in a leaf.

However, given the early hours — the shuttle with the crew of STS-128 is slated for a 1:36 AM liftoff Tuesday morning — and the current forecast — — meteorologists give it an 80 percent chance of a go — it looks like night will turn to day as NASA lights up the sky.

This mission will deliver key supplies to the orbiting laboratory as well as a replacement for Tim Kopra who currently resides on the space station. Astronaut Nicole Stott is scheduled to replace Tim Kopra and remain on station for three months. Also on this mission is the Combined Operational Load Bearing External Resistance Treadmill or COLBERT, named after the comedian who asked his viewers to enter his name on the NASA website.

Tim Kopra: Nicole will replace Tim Kopra when she gets to the ISS. If you are curious to know what he has been up to, go here. Basically they are spending a lot of time checking out the effects of space on each other and running some experiments. He’s also taking photos for the ISS Moon Score, a series of lunar stage photos that will be set to music as part of the educational program JAXA.