Kelly McCarthy Posted on November 25, 2014 Posted in Uncategorized
A crucial maintenance programme has begun at the world’s largest working waterwheel, The Great Laxey Wheel.
Designed by the Victorian engineer, Robert Casement, the wheel was completed in 1854 to pump water from the depths of the Laxey mines using water from Glen Mooar to power the wheel. The impressive 22m (72.5 feet) diameter structure found immediate popularity and has remained one of the Island’s most iconic and dramatic tourist attractions for over 150 years.
The famous waterwheel, Lady Isabella was last repainted between winter 2003 and spring 2004 in time for her 150thanniversary celebrations. As part of her planned cyclical maintenance programme, she has recently been clad with scaffolding in preparation for the next programme of repairs and redecoration, commencing this week and throughout the winter period.
In 2013, priority preservation work was completed on the T-Rocker, which once helped prevent flooding to the Great Laxey Mine by pumping water from the mine. Works involved strengthening the main timber beams of the T-Rocker, which are some of the last remaining original timber elements of the Great Laxey Mine.
In preparation for the next phase of works, surveys have been completed to reveal the full extent of repairs required to the historic structure. The surveys revealed that work was needed on the stone masonry on the wheel housing, together with timber repairs to both the cladding and the wheel structure.
Initial works will involve cleaning the waterwheel, followed by removal of vegetation and fungicidal treatment to both woodwork and masonry. A complex tank structure will be built below the waterwheel to prevent biocides washing into the river. Old render which has suffered decay caused by natural weathering will be replaced, and then the wheel, housing, risers and viewing platform will be re-painted.
Edmund Southworth, Director of Manx National Heritage said:
“This major project will help insure the integrity of the Laxey Wheel as a national landmark for future generations to enjoy and demonstrates Manx National Heritage’s commitment to the ongoing preservation of the Lady Isabella as one of the Isle of Man’s most iconic historic monuments”.
Works will be completed by a local team of contractors, employing workmen from across the Isle of Man including tradesmen resident in both Laxey Village and neighbouring Lonan. 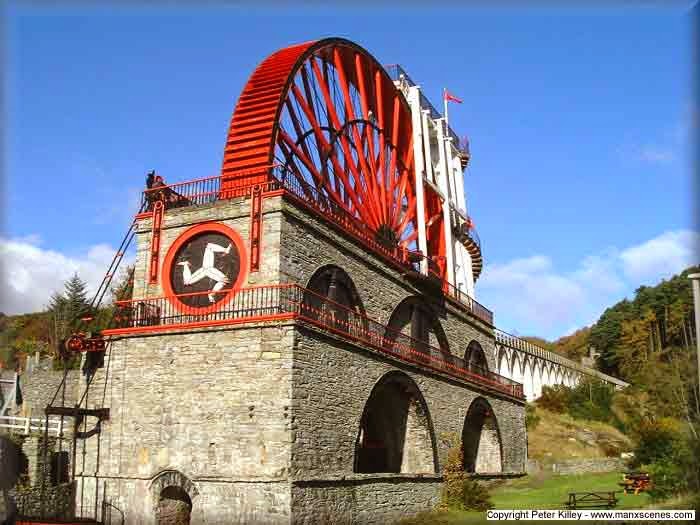 The wheel was constructed to the design of local engineer Robert Casement, a self-trained millwright. Most of the iron castings were made by Gelling’s Foundry in Douglas, with only the largest piece, the hub, being made off-Island at the Mersey Ironworks. The pieces were then assembled on site. As well as being a functional item, the wheel was to some extent a vanity project for the director of the mines, George Dumbell, who wanted the Lady Isabella to be seen as a symbol of his prestige. The wheel ensured the profitability of the mine for another thirty or so years, providing employment and wages for many families in Laxey and Lonan.
The preservation of the waterwheel is one of several projects currently being undertaken by Manx National Heritage with works also taking place at the Grove Museum in Ramsey to repair its 150 year old roof and the Nautical Museum in Castletown, with plans to rehouse, conserve and study the Peggy.
Editor’s Notes
The Great Laxey Lead and Zinc mine was once the foremost metalliferous mine in the British Isles, with an output of Zinc blende that on occasion exceeded the combined total output of all other Zinc Mines in the British Isles. The mines closed in 1929, although the continued potential of the Lady Isabella as a tourist attraction was recognised by local man and entrepreneur, Edwin Kneale, who first leased then in 1937 bought it. The wheel was later acquired by Isle of Man Government and came into the care of Manx National Heritage in 1989.