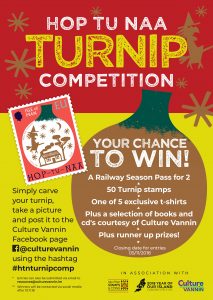 Hop tu Naa is a well established Manx tradition which celebrates the Celtic New Year on the 31st October. It is seen as a time to beware of evil, when divination may be practiced (particularly if you’re looking for a soul mate), spinsters would be encouraged to bake the infamous Dumb Cake (Manx Gaelic: Soddag Valloo) and it is an opportunity for a character named Jinny the Witch to make an appearance. A unique song and traditional dance have also survived contemporary influence.

Some of the practices associated with this time of year which haven’t readily endured are now simply a matter of historical record, but the staunch survivor of this period is the tradition of carving a turnip – known colloquially as a moot. Recognised as a useful tool to ward off any impending evil, turnip bearers move predictably from door to door singing what now appears to a present-day audience as little more than a nonsense rhyme, in exchange for a donation of confectionary, or money.

But this year Culture Vannin is providing an opportunity for devotees to enter what is thought to be the Island’s biggest ever turnip carving competition, which will continue until the 5th November.

James Franklin of Culture Vannin commented, “Hop tu Naa is a wonderful chance to celebrate who we are and what makes the Isle of Man so wonderfully different and exciting. We are delighted to think that this competition gives people the chance to be recognised and celebrated for the wonderful things they are doing in keeping the Manx traditions alive and well today.”

Images will be shared online as a celebration of Hop tu Naa with lucky winners set to receive a number of heritage inspired prizes, in conjunction with the Year of Our Island initiative, the Isle of Man Post Office and Culture Vannin.

General Manager of Isle of Man Stamps and Coins, Maxine Cannon, said, “Joining in celebrations of Manx customs through the release of the Hop tu Naa stamp in our new stamp collection (Manx Folk Tradition) is an enjoyable part of the work we do to bring our culture and heritage alive to a worldwide audience.”

To enter the competition, pictures of your carved turnip (pumpkins need not apply) should be submitted through email, Twitter or Facebook. Post a picture online using the hashtag #htnturnipcomp, or email them to resources@culturevannin.im.

Further information about Hop tu Naa, or suggestions about how to carve your turnip, can be found at www.culturevannin.im/hoptunaa.