In light of the continued growth of interest in Manx Gaelic and the international recognition it has engendered for the Island, Culture Vannin’s Manx Language Development Officer, Adrian Cain, has been invited to join the Guernsey Language Commission. 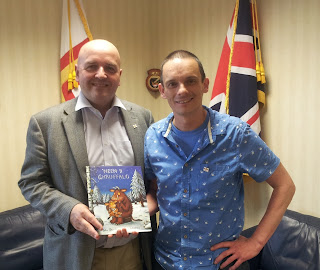 Often referred to as Guernsey French or ‘patois’, Guernésiais is a form of the Norman language, and although there were approximately 1,300 fluent speakers in the year 2000, this figure has now fallen sharply. Most of the remaining speakers are now aged over sixty five and the language has now been classified as ‘endangered’.
Little of the language is taught in Guernsey’s schools, but Adrian Cain was invited to the channel island to discuss the Isle of Man’s experience of developing an integrated adult language programme.
Language supporters and politicians from Guernsey have already visited the Isle of Man on several occasions, but it’s envisaged that this appointment will lead to a closer working relationship between the two island nations.
During his recent visit, Adrian Cain met the Chief Minister of Guernsey, Jonathan Le Tocq (a native speaker of Guernésiais) and appeared on Radio Guernsey.
In addition, the Manx traditional power trio Barrule also took part in a concert at St Peter Port, which gave the channel island audience a great introduction to Manx language and music.
www.learnmanx.com
Valerie Caine