As we wage our own war with Covid-19, one of the final productions staged at the Centenary Centre in Peel was a unique double act reflecting in comedic fashion on one of the more distinctive aspects of World War II.

The ubiquitous Home Guard was ultimately revived in peace time by David Croft and Jimmy Perry in the successful TV series Dad’s Army; which subsequently transferred to radio.

Despite the passage of time, there’s clearly an audience for such nostalgia, shown to good effect by the attraction of the stage production Dad’s Army Radio Show – featuring the superb mimicry of David Benson and Jack Lane. 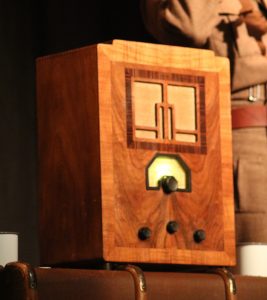 Utilising minimal props and multiple sound effects, one of the nation’s favourite sitcoms, which revolved around the antics of the Walmington on Sea Home Guard, was brought lovingly to life by this remarkable duo, who successfully voiced more than twenty five well-known characters.

Featuring three episodes adapted for radio – When You’ve Got To Go, My Brother and I and Never Too Old – their re-enactment, timing and remarkable performance was warmly appreciated by an enthusiastic audience.

Highly acclaimed by both its critics and audiences of all ages, the Dad’s Army Radio Show succeeded in bringing to the fore many of Perry and Croft’s beloved characters and those unforgettable catch-phrases.