Manx National Heritage teamed up with Lloyds Bank in the summer holidays to offer the chance for a young designer to create an Isle of Man poster and have it professionally produced as a postcard to be placed on the shelves in Manx National Heritage shops. The competition was in association with the Manx Museum’s Exploratorium which is kindly supported by Lloyds Bank, a playful museum gallery that looks back to the time of the tourism heyday on the Isle of Man.

Young people were tasked with promoting a holiday on the Isle of Man, taking inspiration from old holiday posters, postcards, Island attractions, landscapes and heritage. Many of the entries were designed by young visitors at the Lloyds Bank tent and pop-up Exploratorium at The Royal Manx Show in August.

The chosen winner was the talented Dalainea Brown, aged 10 with her design of some of the Island’s most iconic attractions, as well as our famous Manx Loagtan sheep and the Little People. Dalainea’s design will be produced for display in the Manx Museum Exploratorium and also produced as a limited edition postcard which will be sold in return for a 50p donation to support the work of Manx National Heritage to help preserve and protect the Island’s heritage. Dalainea will also receive a VIP tour with her family at her chosen Manx National Heritage site.

“We are so proud to continue to support Manx National Heritage in the wonderful work they do to preserve and protect the Islands heritage. The quality of the entries for the competition was very high and it was clear that the entrants had all put a great deal of time and effort into their designs.  This did made judging a real challenge, but it was the way that Dalainea’s work illustrated brilliantly so many of the treasures that our very special Island has to offer that convinced us that she was our winner.”

The two runners up were Ellie Katsihtis, aged 10 with an sandy Douglas beach scene and Isle of Man in colourful type who was visiting the Isle of Man on holiday during summer, and Billy Kneen, aged 6 with his bold black and white representation of the Laxey Wheel both received MNH goodies and their designs will also be on display in the gallery.

The Happy Holidays Exploratorium at the Manx Museum is open Monday to Saturday until spring 2017 when it will take on a new theme. Many of the vintage holiday posters can be searched at www.imuseum.im. 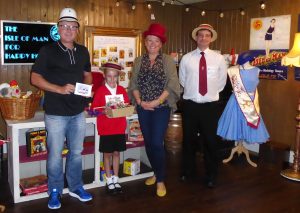 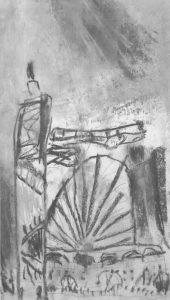 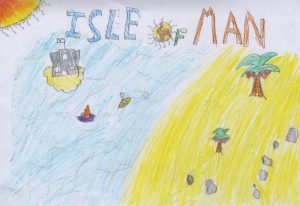 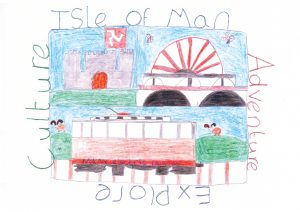