'Dalby Spook' mongoose mystery back in the spotlight 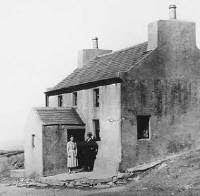 THE case of a Manx mystery which made headlines around the world is to reopen more than 70 years after the first claimed sighting.
Speculation has surrounded the case of the Dalby Spook — a talking mongoose called Gef — since a 13-year-old girl is said to have first seen it in 1931.

Now, Christopher Josiffe, a cataloguer at London University’s Senate Library, is carrying out new research into the case and he is appealing for Islanders to help uncover the truth. ‘I have never been able to decide whether Gef was a hoax, or a genuine — if unexplained — phenomenon,’ he said. Much research has already been carried out since the Irving family, living in a cottage at Doarlish Cashen, heard strange sounds coming from behind panelling in the house.

It is claimed James and Margaret Irving’s daughter, Voirrey, befriended a creature with yellow fur, bushy tail and flat snout, and which introduced himself as ‘Gef, an extra clever mongoose from Delhi’.
Gef could sing as well as talk and, with Voirrey’s tuition, his vocabulary grew rapidly. He roamed the area to relate gossip back to the Irvings. He had many traits linked to poltergeists — an uneven temper, was prone to throwing objects at people and made exaggerated claims about his powers.

Reports of Gef ended when the Irvings left Doarish Cashen in 1935. The next owner, a Mr Graham, said he snared and killed a strange-looking animal. More