It’s such a tough decision!!!! I have tickets for Back Door Slam at the Birchmere, Alexandria, VA on the 25th. And guess what else happens that day? The shuttle launch with Nicole Stott, our own (by marriage, and nothing wrong with that) Manx Astronaut in Florida. Admittedly, if we left straight after the launch and had no problems and didn’t eat or pee for 14 hours we could make it back in our trusty minivan but I’m not that lucky, something would go wrong. So, we’re Cocoa Beach bound and sadly, won’t see Davy this time. But here’s a great article on him: 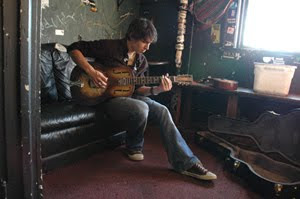 By now, the story of the skinny white kid from the Isle of Man is old news. Word has spread fast about Davy Knowles and his band Back Door Slam, the young seminal blues prodigy who, despite his fresh-faced appearance, U.K. accent and quiet demeanor, routinely lights up rooms with his bellowing vocals and hair-raising guitar solos.

Nothing has changed in that department. In fact, Knowles’ star continues to rise as he sets the gearshift for the heart of the sun, but otherwise a lot has changed. With the new album, Coming Up for Air (released June 16 on Blix Street Records), the supporting tour in motion, and a continuing line of high profile dates on the horizon, Davy Knowles & Back Door Slam may claim to be “coming up for air” but you certainly wouldn’t know it.