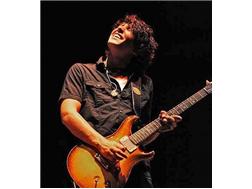 Davy Knowles has written an anthem for the Commonwealth Youth Games which take place in the Island in September.
The singer and guitarist – who grew up in Port St Mary but now lives in Chicago – was commissioned by the Isle of Man Arts Council to write and perform the song Reach Higher.
Davy, who will be performing at The Garden Party festival in Onchan this Saturday, will return to the Isle of Man to perform the anthem at the opening ceremony.
He said: “What an absolute honour it is to be asked to contribute to such a wonderful event for the Island.
“It was a fantastic collaborative process working with the most talented musicians on the Isle of Man.
“I am really looking forward to performing our anthem live for the first time this weekend at the Garden Party festival.”
Producer Dave Armstrong of DAM Productions said: “I would describe it as a contemporary Celtic blues anthem and it truly was an international collaboration with Davy working on it in Chicago, Christine Collister recording backing vocals in Los Angeles and Christy DeHaven and Anna Goldsmith recording their vocals here on the Island, along with its production.
“The singers are all here rehearsing this week for Saturday’s preview performance, which will be led and accompanied by Davy on guitar, a guest performance by Katie Lawrence on fiddle and Mark Brabbs on drums.”