December 9th – 100 years since the sinking of the Ellan Vannin 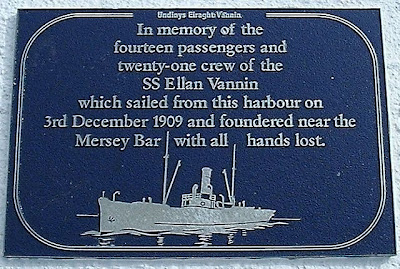 The 100th anniversary of the wreck of the Ellan Vannin will be commemorated with a wreath laying ceremony at the site of the disaster. Public transport body Merseytravel has agreed to provide a ferry which will take dignitaries out to the site in the Mersey estuary on Thursday, December 3.

Chief Minister Tony Brown will represent the Isle of Man and will lay the wreath on behalf of the Manx government. Also aboard will be the man who wrote the well known song about the disaster.

The Steam Packet’s Ellan Vannin left Ramsey on December 3 1909 bound for Liverpool, but a huge wave overwhelmed her in rough weather. Five hours after she set out, she sank with the loss of 15 passengers and 21 crew in gale force eleven winds and 20 feet waves. A fund for victims’ relatives was set up and the Steam Packet donated £1,000 but the feeling behind the tragedy is revealed in the fact the company never again named a vessel Ellan Vannin.

Hughie Jones of the Spinners wrote the song about the Ellan Vannin, and will perform it live during the ceremony. Here are the words from the song.