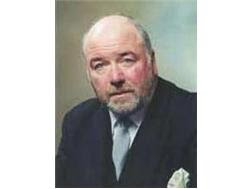 Lieutenant Governor Sir Paul Haddacks said: ‘I am greatly saddened by the death of His Honour Deemster Kerruish. ‘I very much valued his wise counsel and his friendship. His Honour was a true Manxman and he will be a great loss to the Isle of Man. Lady Haddacks and I extend our deepest sympathy to Marianne and his family.’

Deemster Kerruish was educated at Douglas High School for Boys and the University of London, and served in the Royal Air Force before embarking on a distinguished legal career. He was appointed HM Attorney General for the Isle of Man in October 1993 and held this post until January 1998 when he became Second Deemster. From 2003 until his death, he served as First Deemster and Clerk of the Rolls, presiding as Chief Judge of the Island’s High Court of Justice.

And from Isle of Man Today:

SECOND Deemster David Doyle has given a moving tribute to his colleague Deemster Kerruish who died earlier today.

Deemster Doyle said: “John Michael Kerruish excelled as a Manx advocate, as a helpful, pragmatic and hard working Attorney General and as a fair and wise deemster who modernised court procedures and gave greater access to Manx judgments worldwide via the internet.

“Most of all however he excelled as a caring, warm hearted, down to earth, loving man. He was a very special human being.

“He really cared for the people and the community of this Island. His wise advice and opinion, his good and considered judgment, his sense of humour and his roaring Manx laughter will all be sadly missed.

“He was a great man who has made a massive contribution to the Island.

“Deemster Kerruish had an overwhelming sense of public duty. He had an unusual capacity for sustained hard work and he enjoyed it.Deemster Kerruish was a huge presence on the Island and particularly in the Isle of Man Courts of Justice. He was very close to and supportive of his judicial colleagues and the dedicated team of court clerks and support staff we have in Courts Division.  We will all miss him.
We extend our deepest sympathy to his family at this difficult time. Deemster Kerruish could not have achieved all that he did achieve without the love, support and encouragement of his family, of his parents, of his wife Marianne and his children his son Daniel and his daughter Summer. The Island will forever be indebted to them for permitting Deemster Kerruish to devote his life to public service on this Island.”