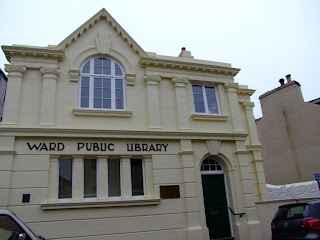 The ‘Ward Library’ in Peel had a surprise visit recently by the great-grandson of James Kewley Ward, a man born into poverty on the site of the library who later emigrated to Canada where he became very successful.

Mr. and Mrs. Tim Harvie of Ontario popped into the library as part of a nostalgic trip to the Island where they discovered resident librarian Carol Horton, who was able to inform them of details regarding historical aspects of the great man’s life.

Ann and Tim Harvie also popped across the road to the ‘Leece Museum’ where Curator, Roy Baker, showed them a number of artefacts connected with the family including the Ward family Bible. Some of these items were left to the town by the aforementioned Mr. Eadie and another cousin, Miss Betty Ward, on a previous trip to the Island in 1978.

Ann was presented with flowers before the couple headed up Castle Street to find the remains of St. Peter’s Church which includes a fine clock tower donated by James Kewley Ward to the town in 1871. Although the clock stopped working during the 1970s, John Ward Eadie and other descendants of James Kewley Ward generously paid for its repair.

Carol took the opportunity to share further information about the family with Mr. and Mrs. Harvie, including a lecture given by Arthur Bawden for Peel Heritage Trust about the life and times of James Kewley Ward.

Regrettably the ‘Ward Library’ was unable to establish contact with members of the family in time for the library’s centenary celebrations in 2007.

Mr. and Mrs. Harvie made a generous donation to the library which will be used to purchase further volumes for the facility’s growing collection of Manx books.