Did they finally discover the "cut & paste" culprit? 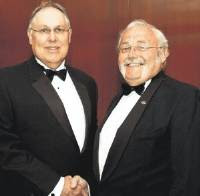 For years the IoM has appeared on the U.S. Congress’s blacklist of jurisdictions tarred with the brush of “tax haven.” After years and years of visiting D.C. and saying, “We’re as clean as you are” the U.S. may finally have had a “D’oh” moment. IOMToday

The head of an influential taxation agency in the United States of America has praised the Isle of Man for leading the way in developing international standards of tax transparency and co-operation.

The Multistate Tax Commission works with individual states across the US on issues relating to the taxation of inter-state and international business.

Dr Huddleston said it was important to appreciate the layered structure of government in the US and the role of the 50 individual states, some of which are amongst the top 25 economies in the world.

The key problem for states was how to tax business with international interests. Corporations with a presence in jurisdictions deemed to be ‘tax havens’ were liable to state tax on their worldwide income, which could have a dramatic impact on them. Dr Huddleston pointed out that the focus for the states was on taxing business, without much thought for the individual jurisdictions involved.

Lacking the expertise to make their own assessment, states had looked to OECD lists to provide authoritative guidance on what was considered to be a ‘tax haven’.

‘One of the problems in the US is that we have clung to old lists’, admitted Dr Huddleston, who added that he had not realised the implications of this until he met the Chief Minister and an Isle of Man Government delegation in Washington.

He noted that today the Isle of Man was in the same OECD category for tax transparency as the US itself, and other major nations.

The Multistate Tax Commission was now looking at the promotion of objective standards in relation to transparency and information sharing. The Isle of Man had been at the forefront of international discussion in this area in recent years, he said.

Dr Huddleston told the audience at the Mount Murray: ‘In the Isle of Man you should be proud that you have taken this leadership role in developing standards for business around the world.

‘You have taken an exceptionally proactive stance in identifying these issues and understanding how they impact on the Isle of Man. You should give yourselves a pat on the back.’

The Island’s ability to engage internationally would stand it in good stead in coming years, said Dr Huddleston. He declared: ‘I believe the opportunities that face you are far greater than for many other jurisdictions and I am confident that you will take advantage of those opportunities.’

Introducing Dr Huddleston, Chief Minister Tony Brown MHK described him as ‘one of those people who has always had an open door – as well as an open mind – and listened to the Isle of Man Government’s point of view.’

Dr Huddleston advised and assisted state legislatures and business in the US and was able to provide them with hard facts about the Isle of Man to counter misinformation, said the Chief Minister.
Mr Brown said this was the fifth event in the Chief Minister’s International Lecture Series, a series of talks which began in November 2007.

The Chief Minister explained that the lecture series supported Government’s policy on external relations by engaging in a two-way conversation with key people in both London and Washington, and supporting Island business leaders in their understanding of the international agenda.

He reminded the gathering of the Isle of Man Government’s position: ‘As well as being economically competitive and internationally responsible, we believe that taxes must be equitable, fair and consistent; that all countries should be open and transparent, as we are; and that there should be a level playing field in terms of tax competition’.