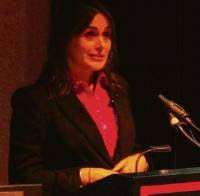 NATURAL and man-made treasures of the Island’s waters were the focus of the Isle of Man Dive Conference 2010. The morning session was dominated by wrecks, with director of harbours Captain Michael Brew discussing his role as Receiver of Wrecks and the powers it carries for dealing with items recovered from the sea.

Captain Brew told the story of UK-based divers who recovered artefacts from the Romeo, a Second World War wreck lying on the sea bed off Peel. He acted to keep them in the Island so that they could be assessed by experts.

Manx Museum curator Allison Fox explained how Manx National Heritage worked to conserve the items and prevent their deterioration once they had been brought up from the wreck site. The artefacts that are of significant historical importance are now on display at the House of Manannan in Peel, having been donated or loaned by the divers. The possible expansion of the definition of underwater sites as Ancient Monuments was discussed and the audience at the conference unanimously voted to support efforts for increased protection of wreck sites.

The afternoon session was devoted to marine conservation and led by Dr Fiona Gell (photo), marine wildlife and conservation officer for the Department of Environment, Food and Agriculture. She talked about progress towards the creation of a Marine Nature Reserve, urging divers to comment when possible locations for a reserve are publicized later this year.

Fisheries director Dr Andy Read discussed more environmentally-friendly ways of harvesting scallops and also updated the audience on a planned cable reef trial in Port Erin. There was also a raffle which raised £180 for the Hyperbaric Chamber.