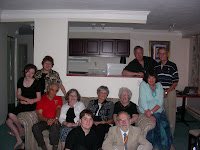 Stopping off in Vancouver before an Alaskan cruise, Dollin Kelly, this year’s recipient of the prestigious Manx Reih Bleeaney Vanannan Trophy (Manannan’s Choice of the Year), met with the Vancouver Manx Society. Here, Terry McCaffrey, President, Vancouver Manx (right) and Kelly McCarthy, President of the Greater Washington Area Manx Society (and Dollin’s daughter) are seen in Vancouver. After dinner, Dollin entertained the Vancouver Manx with recitations from T.E. Brown, the great Manx Victorian poet. Terry responded with his favorite reading from Brown’s works. A great time was had by all!