Dolphins celebrate Christmas off the Calf 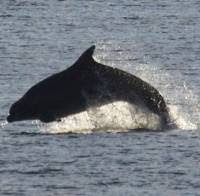 THERE was a further sighting of dolphins off the Isle of Man on Christmas Day. At least 100 bottle nose dolphins were spotted off the Calf on Christmas Day. It has proved a busy week for dolphin spotting. Two sightings were reported on Tuesday morning – one in Douglas Bay and one in Niarbyl.

A spectacular image of a bottlenose dolphin in Manx waters captured by photographer Tim Moolman earlier this month.