Don’t bring drugs to the Isle of Man 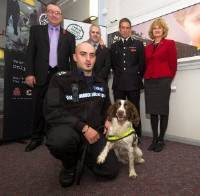 BRING drugs into the Isle of Man and you could end up staying for 14 years. That’s the message in a police campaign launched on Friday at ports and airports across the north-west of England.

It is hoped the Ports Anti-Drugs Campaign – financed through money seized from drug dealers – will raise awareness of the seriousness of the crime and its consequences when convicted, through posters, leaflets and beer mats. Here.