↓ Skip to Main Content
Home › Uncategorized › Down to the Titanic

Down to the Titanic

Tomorrow marks the 99th anniversary of the sinking of the Titanic, an event so shocking that it still moves us. Here’s a story with a Manx theme that links us to the events of that freezing night in a lost era, long, long ago.


Former Irish Garda Sean O’Connell now lives on the Isle of Man with his Manx born wife, but a chance meeting with a man back in his native land inspired Sean to take a once in a lifetime journey in the year 2000 to see the remains of the ill fated vessel Titanic. 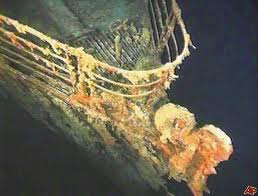 Sean set out on a nine day journey from Birkenhead to St John’s in Newfoundland, but it was an onerous start on his voyage of discovery. The vessel was not designed for passengers and his cabin, situated in the bow of the ship, was small and cramped. Worst of all he believed the boat’s skipper took an instant dislike to Sean and his companions. 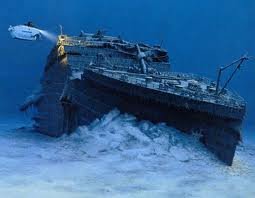 Upon reaching St John’s Sean found it difficult to adapt to moving around on land, but there was little time to worry about this as he moved on to meet up with the exploration vessel and attend de-briefing sessions both before and after his dive. He also spent time familiarising himself with a model of the Titanic before he descended into the Atlantic Ocean.
Sean was sent down to the wreck of the Titanic, which sits two and a half miles down on the seabed, confined in a nineteen ton submarine. Conditions were not ideal. He was joined by a Russian pilot who spoke no English in a cramped area for three people with at best rudimentary toilet facilities. The ten hour journey held inherent dangers, but fortunately his other companion was wearing his lucky moose head slippers and they made it back to the surface, albeit not without some moments of apprehension.
The Titanic broke in two as she sank, scattering debris across the seabed for some distance, including countless numbers of artefacts wrenched from their owners as they succumbed to the inevitable plan that fate had drawn for them. Disputes continue unabated about whether items from the stricken vessel should be returned to the surface, or remain undisturbed on the seabed as a memorial to those who died.
However, Sean’s expedition brought back some unusual items including a tea boiler and a chandelier which now forms part of an important exhibition. Most of their finds represented the minutiae of daily life such as a woman’s purse and assorted hair accessories, a man’s long lost pipe and a solitary uniform button. One of the most exciting revelations was the recovery of a bag of perfume samples, remarkably still intact and holding on to a powerful scent after all these years at the bottom of the ocean. With the help of historical records Sean discovered that the owner of the samples survived the tragedy and later a Titanic perfume was recreated from the original samples, but cases of wine, boxes of unopened crockery and forlorn suitcases still remain unclaimed on the seabed.
Back on the Isle of Man, however, people were more than a little curious to hear about the discovery of a plate belonging to the long established Isle of Man Steam Packet Company, recovered on an earlier expedition. How a piece of crockery from a vessel plying between ports surrounding the Irish Sea came to be with the wreck of the Titanic is a mystery, but we do know that one of the crew members did have a distinct link with the Island. Charles Joughin, although born in Birkenhead, was of Manx descent and became apprenticed in Peel on the Isle of Man at a bakery and general store, situated at 8 Michael Street and owned by a relative John Joughin MHK , and was later employed on the ill-fated ‘Titanic’ as Chief Baker. His actions during the sinking of the vessel brought Joughin unsought fame and recognition and he was later immortalised in film. Joughin (pronounced Jockin) is a distinctive Manx surname which historically was linked to the north of the Island, but has since spread to other parts of the Isle of Man and indeed far beyond its shores. Whether he was tempted to pocket an unconventional souvenir, perhaps during a visit to the Island, we will never know and is little more than conjecture. But we do know that Charles Joughin survived both the sinking of the ‘Titanic’ and the ‘Oregon’ in Boston Harbour, dying of pneumonia in New Jersey in 1956.
Sean was asked to make a return visit to the wreck of the ‘Titanic’, but financially this wasn’t possible, although he carries with him some unique and treasured memories of a trip of a lifetime down to the most famous trans-Atlantic ocean liner in history.
Valerie Caine © April 2011