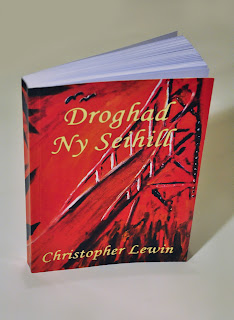 Christopher Lewin is currently studying Celtic and Linguistics at Edinburgh University whilst learning Scottish Gaelic, but his keen interest in the Manx language has brought him some early success within the realm of creative writing here on the Isle of Man, along with praise and encouragement to continue writing other publications.
Having previously written a collection of short stories in Manx Gaelic, ‘Jough-laanee Aegid as Skeealyn Elley’ (The Elixir of Youth and other Stories) Christopher took on the challenge of writing a full length novel. ‘Droghad ny Seihill’ (The Bridge of the Worlds) is a fantasy novel about a young Manx girl who discovers that she has unusual powers which allow her to travel to a parallel universe. Although permitting  her to escape from her problems in this world, things start to become more sinister, people vanish and an ancient evil is awoken from its slumber.
Fantasy is a genre that interests Christopher because you are not limited to the real world, although the original concept of ‘Droghad ny Seihill’ emerged from a number of ideas that had been fermenting for some time in the back of his mind. He’s also keen to weave mythological characters and themes into his story, with Manannan supping a pint at a Douglas hostelry and reminiscing about past glories.
Christopher began writing ‘Droghad ny Seihill’ two or three years ago, but was obliged to put the project on hold whilst he tackled exams. He is excited at long last to see the story in print which adds to the choice of literature available to a growing number of Manx speakers.

He commented, “Quite simply people want things to read. There are more and more people learning Manx and after all their hard work they want to be able to read a wide range of material in the language. Not so long ago there was hardly anything to read in Manx, apart from the Bible, and though the situation is changing with several new, modern books of various types appearing in recent years there is still scope for more. Having said that, the older material is still valuable and as well as new material it is important that more of the 18th and 19th century literature, much of which is full of good idiom and vocabulary, is made accessible to students of Manx”.

Christopher is delighted to be contributing to the revival of the Manx language and hopes that his most recent publication will entertain readers and encourage others to learn and write in the language. Although the availability of written Manx has improved enormously during recent years Christopher believes there’s always room for additional literature and hopes to write more books himself in both Manx and English in the future.
‘Droghad ny Seihill’ was officially launched after the annual ‘Ned Maddrell Memorial Lecture’ where a large number of Manx speakers listened to Christopher as he read an extract from his new book.
Priced at £8 ‘Droghad ny Seihill’ is available from the Lexicon Bookshop in Douglas, St. Paul’s Bookshop in Ramsey and The Bridge Bookshop in Port Erin, or directly from Dr. Brian Stowell by phoning 011 441 624 623821.
(Courtesy of Manx Tails) Valerie Caine © March 2011