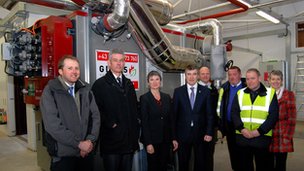 Queen Elizabeth II High School in Peel installed a bio-mass wood pellet boiler to replace an oil fired system.
It is thought the new appliance will need about five tonnes of fuel every week, all of which will be sourced from Manx conifer forests.
Government energy officer Peter Longworth said cost savings were predicted to be £12,000 a year.
The boiler from Austria was paid for by the government’s Energy Initiatives Fund and cost £128,000 to install.
Environment minister Phil Gawne said: “I think this is a fantastic example of local sourcing.
“The nearest plantation is less than five miles away and the sawmill is less than two miles, far better than having to import oil or gas from less direct, less secure, external sources.”
Other sites on the Isle of Man with bio-mass boilers are government buildings in St Johns, Reayrt Y Chrink, Port Erin; Clagh Vane and Ballasalla.