Eddie Izzard thanks the Isle of Man for aid to Syrians

Kelly McCarthy Posted on August 16, 2013 Posted in Uncategorized
Comedian Eddie Izzard has thanked the government and people of the Isle of Man for supporting a project to provide humanitarian relief to families fleeing the war in Syria. (iomtoday) 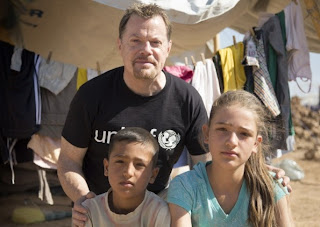 He recently visited a Syrian refugee camp in northern Iraq in his capacity as a UK ambassador for UNICEF, the world’s largest organisation for children.
UNICEF is working to provide potentially life-saving supplies such as clean water to help prevent dehydration and the spread of disease in the hot and overcrowded conditions.
The charity’s relief efforts received a boost earlier this year thanks to funding from the Isle of Man Government’s international development committee.
The committee, which supports the world’s less developed nations through emergency aid and capacity building programmes, provided £30,000 to UNICEF’s ‘Children’s Crisis in Syria and Surrounding Regions’.
Eddie Izzard travelled to the Domiz refugee camp in northern Iraq to see how UNICEF is using donations from around the world to address the humanitarian crisis.
The camp was intended for 15,000 people, but now 45,000 are crammed within its borders after being forced to abandon their homes, friends and schools. In such packed and sweltering conditions, with temperatures reaching 45C, there is a great risk of dehydration and the outbreak of disease.
In a handwritten letter to the international development committee, Eddie Izzard says: ‘Dear Isle of Man Committee. I have just flown back from Iraq where I was in a refugee camp for families who have been forced to flee from their homes in Syria. These families are now facing many problems, from extreme heat to overcrowding and health.
‘The situation for children is critical. Yet, thanks to funding from supporters such as you, UNICEF is providing water, sanitation, education and a safe place for children to overcome the trauma they’ve experienced. Thank you for your support.’
Phil Gawne MHK, chairman of the international development committee, said Eddie Izzard’s letter highlighted how emergency aid provided by the Isle of Man is helping to make a positive difference to people’s lives.
He added: ‘Given the scale of the humanitarian crisis in Syrian refugee camps it is important that the Isle of Man does what it can to help those who are struggling for the basic necessities of life that many of us take for granted.’