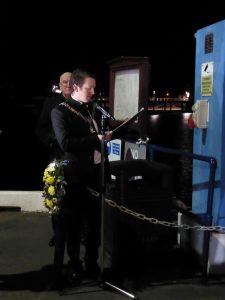 A dedicated group of supporters gathered at the memorial to the S.S. Ellan Vannin, placed by the Manx Heritage Foundation (now known as Culture Vannin) on the quayside at Ramsey to take part in the annual Service of Remembrance, to mark the anniversary of what is probab 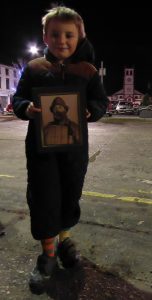 ly one of the greatest maritime disasters in Manx history.

The event was organised by Ramsey Town Commissioners, with a brief introduction by Deputy Chairman, Luke Parker, followed by opening prayers from Father Brian O Mahony of Our Lady, Star of the Sea and St Maughold Church where there is a plaque to commemorate two stonemasons who were working on the church and subsequently died on the Ellan Vannin, and the observation of one minute’s silence.

The short service concluded with a reading of the names of crew members of the Isle of Man Steam Packet Company and passengers who died aboard the Ellan Vannin as it foundered near the Mersey Bar, en route to Liverpool on the 3rd December, 1909. 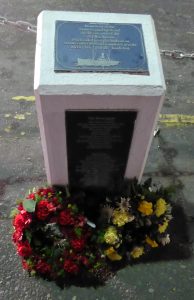 In conclusion, wreaths were laid on behalf of Ramsey Town Commissioners and the Isle of Man Steam Packet Company before closing prayers by Father Brian O Mahony.

Those gathered at the quayside in Ramsey, from whence the Ellan Vannin sailed, counted descendants of those who perished on that fateful night, including one young boy descended from seaman Thomas Corkish.

Meanwhile in the USA, Robert Ramsey Benson (grandson of seaman John Benson) watched the service from his home with his daughter.

A video of the event is available now on the Ramsey Town Commissioners Facebook page.

Further information about the sinking of the Ellan Vannin is available from Richard Stafford’s book of the same name which can be purchased through Culture Vannin’s website.