Kelly McCarthy Posted on March 17, 2011 Posted in Uncategorized
HE may not be conventionally good looking, but male guanaco Elvis is certainly attracting attention from visitors at the Wildlife Park.
Elvis – named after the legendary singer because of his curled lip – has been at the Ballaugh park since his birth in 2000.
But interest has grown in the llama-like animal so much, a notice went up last week to explain why he looks the way he does.
Elvis likes to make his presence known among visitors, sometimes following them through the enclosure. 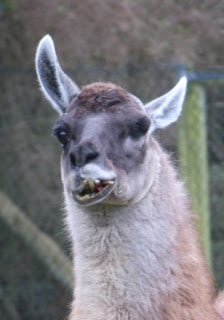 He was born at the park in March 2000 with a facial paralysis affecting one side of his face.
The sign explains: ‘Known as Elvis to the keepers, he has a droopy lip and ear and had one eye removed after developing a tumour.
‘Rather than having him put down, park keepers decided to allow him to live out his life at the park because he is not suffering as a result of his condition.
‘He may follow visitors out of curiosity but we ask that you do not stroke or feed the guanaco, or any of the animals.
‘If you have concerns or queries about any animals in the park, please bring them to the attention of staff.’
Elvis’s mum died in 2002 and his dad died in 2006. And due to his deformity, staff are unwilling to involve him in breeding.
They may consider replacing him with a breeding pair ‘in due course’.
Despite this, staff don’t consider the herd animal to be lonely.
General manager Nick Pinder said: ‘The guanaco is in a multi species enclosure and interacts with the maras, the rheas and the public. He is quite content.’
From IOM Today