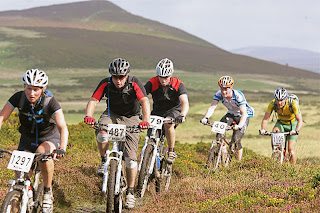 The organisers of the End2End Mountain Bike Challenge, which attracted a record number of riders, have offered their ‘sincerest thanks’ to the police and marshals for their assistance in making this year’s event a success.

‘With 1,400 competitors and several major roads to be traversed during the event we could not have done it without their support,’ said End2End committee chairman Steve Honeybone.  ‘We also want to thank the Manx public for their patience and support, because the event caused some delays for traffic and people living on the route.

‘We hope that the success of the event – which attracted more than 900 overseas competitors and is very good for the Island – will compensate for any disruption that may have been caused.’

Geoff Corkish MBE MHK, Political Member for Isle of Man Tourism, commented on the organisation of the event : ‘The End2End is a brilliant example of public sector, private sector and the sports community working together to achieve excellence.  Team Isle of Man at its finest.’

A major bonus for local sports clubs and charities is that a £25 donation will be made for every marshal who volunteered to assist on the day along the 46 miles route.

Ramsey Rugby Club, for example, provided close to 30 club members to act as marshals at various points in the north of the Island – at the start and at road crossing points. ‘The club will consequently receive close to £750 for their efforts,’ said Steve Honeybone, ‘which I know is very much appreciated by the club and could pay for a new kit for instance.’

Around 120 marshals supported this year’s event – sponsored by Sleepwell Hotels – and they will each gain a £25 donation for their club or charity. The same system will operate again in 2011, but the organisers are hoping that more people will want to become a marshal next year.

‘We coped with 120 marshals, but we do need more,’ added Steve Honeybone. ‘We are highly conscious of trying to avoid traffic hold-ups and congestion wherever possible, and we probably need more marshals to do this more effectively next year.’

The closure of the road between Bride village and the Point of Ayre for an hour at the start of the event made a ‘major difference’ to easing traffic congestion this year and the idea will be included again in 2011.

The major congestion came on roads near Bride where many competitors and supporters had left their vehicles. The organisers are looking at plans to find more parking areas next year, in order to keep vehicles away from the route.

The Sleepwell Hotels End2End Mountain Bike Challenge was once again filmed for TV and will be shown on Sky Sports shortly. The date will be announced in the media when known.